I just spent two packed and exciting days at Chautauqua Institution in upstate New York. I had been hoping for an invitation from Chautauqua for four or five years, ever since Kathy and Jim Pender of Cleveland suggested that I would be a good fit for the audiences there. Chautauqua more than lived up to my expectations. Is there any more enthusiastic summer learning community anywhere in America?

For those of you who don’t know anything about Chautauqua, it was founded in 1874 by a Methodist minister and was, perhaps, one of the first models in America. for “adult education,” In a summer-camp atmosphere—a tightly-knit community of small homes and tiny hotels clustered along the banks of Chautauqua Lake—people could hear sermons, lectures, attend concerts and read books together. The format was copied all over the country in the late 1800’s and early 1900’s; it was particularly influential in providing educational opportunities for women. And it is still going strong.

Where else in America do 3,500 people turn out for a morning lecture? That’s what happened on Tuesdaymorning when I spoke in the historic amphitheater on the subject of “Raising Cain: The Nature of Boys,” part of a week devoted to exploring boys and their growth into men. Looking out at all those people (that’s a large audience for someone accustomed to speaking to 100-300 people at school PTA/PTO events) I wondered if there were really enough parents in the crowd. It seemed like a grandparent crowd, but there were a lot of parents too. Ninety percent of the people in attendance were raising sons, had raised boys, or were now the grandparents and even great-grandparents of boys. It was impossible not to be lifted up by the focus and energy of that crowd. I had a ball on that historic stage.

Throughout the day people stopped me to talk about their sons and grandsons, their own experiences as boys, and their worries about boys in America. I also got a few compliments; people at Chautauqua come hear daily talks and they are openly appreciative. I especially liked the woman who said, “We’ve been coming here since 1987 and my husband says that was one of the best talks he’s heard here.” Nice.

That night, everyone, including me, returned to the Amphitheater for the Chautauqua Symphony led by Maestro Rossen Milanov. The orchestra was playing one of my favorites, Mussorgsky’s “Pictures at an Exhibition.” But it wasn’t just a straightforward concert. Rather it was a music history class with the maestro describing the original paintings by Hartman and walking us through the music; a pianist, Alexander Gavrylyuk, playing Mussorsorgsky’s original piano piece, alternating with the orchestra playing selections from Maurice Ravel’s brilliant and well-known orchestration. It was fascinating to move back and forth from the piano version to the orchestra and back to the piano. In the end, after a powerful rendition of the final movement on the piano, we heard the entire piece played by the orchestra. A satisfying evening. Since they house all the speakers and musicians in the same, I had gotten to meet Alexander (everyone, all the authors and musicians in the Hagen-Wensley House are on a first-name basis) and his family.

On Wednesday morning, I conducted a fathers’ breakfast for about thirty men, half dads and half grandfathers. The common theme was trying to improve on our fathers’ fathering of us, forging closer emotional bonds with our children and grandchildren. Later in the day, I led master classes on adolescent and, for teachers, a presentation on working more effectively with boys in the classroom.

In that jam-packed forty-eight hours I had also managed to have dinner with two other writers, Gilbert King, author of Devil in the Grove, a harrowing story about Thurgood Marshall’s defense of four African-American boys who were being railroaded by an evil Southern sheriff and Frances Jensen, the author of The Teenage Brain. I was able to attend Frances’s lecture in the amphitheater on Wednesday morning. Those same 3,500 people had turned out again to hear what I thought was one of the clearest, most compelling speakers I have ever heard on the subject of the adolescent brain.

Being at Chautauqua was like being part of a non-stop book club. My only regrets were that my wife Theresa couldn’t join me on this trip—she would have loved it—and that I didn’t get to stay the remainder of the week to hear John Krakauer and Lawrence Tribe.

Photo by: SAALIK KHAN | Staff Photographer at the The Chautauquan Daily 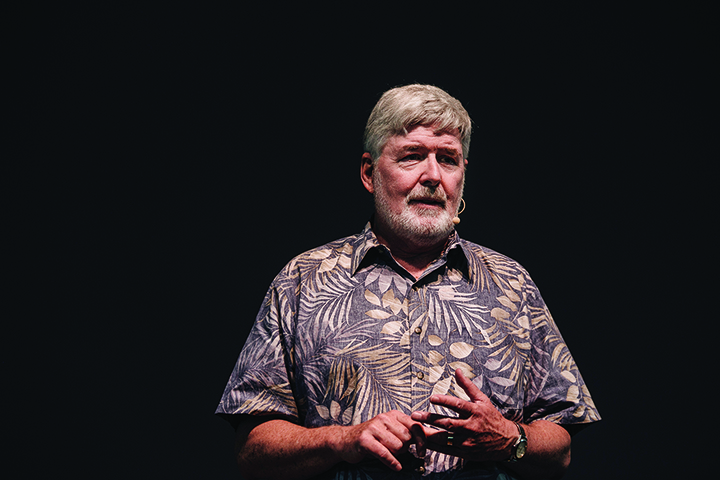