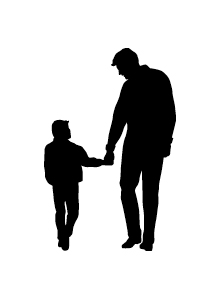 I am a single mom with a 2-year-old son, Sam. My husband passed away from a sudden heart ailment when I was four months pregnant. He was only 32 years old. I would love to get some guidance on what to say to Sam, as he is becoming more and more curious and when he hears the other kids call their fathers “Daddy” he begins to call them Daddy, too. He lights up every time he is around my uncles or his Grandpa or any male. He seems like a real “guy’s guy” and I just don’t want to scare him when he asks me. I thought I’d tell him that his Father is in heaven watching over him. But these kids today are so curious and I am terrified to say the wrong thing. Any advice or guidance would be so appreciated.

I’m sorry to hear that your husband died at such a young age. How painful to lose him when you were pregnant with your and his child. I’m also sorry to know that your son lost his dad so early in life. At two years of age, he has an intense interest in the lives of other boys because he is just beginning to think of himself as a boy. He wants to be just like every boy and he wants to have what every other boy has: a dad. But I think he doesn’t just want a “Daddy” because other boys have one, I believe all children have a deep wish to know the two parents who created them. There is no question that your son will feel sadness or grief when he realizes that his father has died. He will feel it many times throughout his life as he grows up and wonders what it would have been like to have known his dad.

The problem you face is that at two years old, Sam cannot really understand the concept of death. Children that young do not comprehend that it is permanent. If, as a person of faith, you experience your husband as being in Heaven and watching over you, you should tell that to Sam. That is a comfort to you and can become a comfort to him; children like to know that someone is in a place. He may have questions about where Heaven is and why his dad cannot come back from there. Do the best you can to answer his questions; there is no magic answer. It just isn’t easy to explain the concept of an afterlife to someone who doesn’t understand death.

What your son does know is that if you tell him something bad happened before he could remember, that he had a dad, but that his dad “died,” and he can see your sadness, he will begin to understand. If you show him a picture of his dad and tell him how much wish that he had been able to meet his father, and how much his face or the way he moves (or some other aspect of him) reminds you of his father’s, he can understand that he once had a very special man in his life. You say that he loves being with your uncles and his grandfather. That’s great. I hope he gets to spend a lot of time with them. And if your husband’s father is still alive, and if he is able to talk about the loss of his son, he should do so. Nothing complicated: just that everyone loved Sam’s father and that he “died” and he can’t be here anymore because he’s dead, but everyone loves Sam now and he reminds everyone of his dad.

You cannot hurt Sam by telling him the truth, just don’t overwhelm him with a lot of detail that he cannot yet understand, and don’t expect him to “get it” right away. What he needs to know is that if he has any more questions, he can talk to you or other people. He will have questions about his father at many different ages; you want him to feel comfortable turning to you as his future source of information. You can also play a role in keeping his father alive in his mind by saying, “Your father would have been so proud to see you accomplish this (going off to Kindergarten, playing on a town soccer team, whatever).”

← When should forgetful 9-year-old suffer consequences?