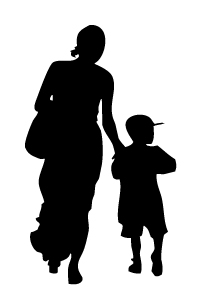 Our son is two-years-nine-months old and has a terrible time with anger. Whenever he gets upset (especially when it’s about something where he lacks control) his immediate response is anger—yelling, screaming, throwing things for effect, even smacking or kicking me. No matter how consistent we have been about saying “hitting hurts,” trying to remove him from the situation, or taking things away when he mistreats them, this behavior persists. I want him to have better tools for expressing his feelings—he is very verbal. Any suggestions for a child this young? Other than these episodes (which are entirely limited to home) he is excited, engaging and joyful.

When I read your question all I could think was: Thank goodness two-year-olds aren’t six feet tall! And thank goodness they don’t stay two (and three) forever!

Helping boys manage their anger is a HUGE issue for many mothers whose sons are between ages two and four. Why is that? Typically, not because there is something wrong with their sons, not because their sons are particularly full of anger. It is because their wishes are so strong, their capacity to bear frustration is so low, and their level of uninhibited aggression is so high. Human beings—both boys and girls—are at their least controlled and least apologetic around the age of two. They can lash out with their screams, their words, their hands and their feet. They can seem incredibly powerful. Under these circumstances, saying, “hitting hurts” or something like “That’s not nice,” just won’t cut it. They need to be managed.

It is very important that you do not allow your son to hit you. If he tries to hit you, grab his arms firmly (not harshly) pin them to his sides, raise your voice and say, “Don’t hit me! You may not hit people!” Get right in his face and say it with strength and power, conveying how upset you are by his behavior. This may make him cry. That’s okay, because your distress will be upsetting for him. That’s an early form of empathy. If he then tries to kick you, wrap him up in a bear hug—this is called a “therapeutic hold”—taking control over his arms and legs until he has cried himself into a calm state. You won’t have to do this many times, but you need to do it until he learns that hitting is not the solution and that you are big enough to control him when he cannot control himself. Though many people spank or hit boys at a time like this, I do not think it is a good idea. If you hit your son, you might lose control and become abusive. In any case, all you are teaching is that hitting is the right solution, and that the bigger person hits the hardest.

Wrapping him up and holding him teaches him that you won’t allow him to hurt anyone—not himself and not you. While you are holding him, just continue to talk soothingly to him, saying, “I know you can feel really mad when things don’t go your way (when I don’t let you have candy, when you want a toy your friend has), but I’m not going to let you hurt people.” And then tell him that you know when he gets bigger he’ll be able to control himself, because all big boys do.

More than anything he wants two things in life: to have you love him and to be a big boy. So if you tell him that you have confidence that he is going to grow into a self-controlled boy, he will experience your trust and the love in your voice. I guarantee you that if you do this for six more months, he will start to develop more self-control. If you want to read further about the therapeutic hold, I discuss it in the “Wild Thing” chapter of my book, It’s a Boy! Write me back if he is still behaving like this at three and a half years old. I bet he won’t be.